© Provided by CNBC
In this photo illustration a PlayStation 5 logo seen displayed on a smartphone.

The company reported operating profit of 359.2 billion Japanese yen ($3.4 billion) in the October-December quarter, up 20% from the same period a year ago and beating expectations. Revenues for the quarter came in at 2.7 trillion yen, up 9% year-on-year.

Sony said sales at its gaming division rose 40% to 883.2 billion yen, helped by the November launch of its PS5 console and game software sales. The unit posted operating income of 80.2 billion yen, up around 50% from the previous year. Profits were helped by software and network services sales, but weighed down by costs related to the PS5, which Sony said was being sold at a loss.

Sony released the PS5 — the successor to its PlayStation 4 console — on Nov. 12, hoping to convince gamers to part with their cash for a next-generation machine with improved graphics and performance, and exclusive titles that can’t be found on other platforms.

At the same time, Microsoft went head-to-head with Sony with a different strategy, launching its Xbox Series X and S machines along with paid subscription plans in a bid to build out its gaming ecosystem. Still, Sony is broadly expected to win when it comes to next-gen console sales.

Sony shipped 4.5 million PS5 consoles last year, roughly in line with what analysts were expecting. It’s expected to have sold 17.8 million units to date by the end of 2021, according to research firm Omdia, and 63.9 million by 2024. Microsoft’s next-gen console sales, meanwhile, are expected reach 12.1 million units this year and 41.8 million by 2024. The new PlayStation and Xbox consoles both retail at up to $500.

The PS5 performed similarly to Sony’s PS4, which shipped 4.5 million units in its debut quarter. Supply has been an issue for the new consoles, though, due to a global shortage of semiconductors.

“Supply will define the marketplace until at least Q2, and after that it’s down to PlayStation and Xbox to really start delivering the goods in terms of first-party exclusives. Along with retail bundling, this is a crucial aspect of stoking second-year momentum in the console marketplace.”

PS5, Xbox shortages linger into the holidays. Here’s when you might be able to get one.

Sony is largely seen as winning in the battle for first-party exclusives — games that can only be played on its PlayStation systems. Microsoft has often been viewed as lagging in this regard, but it’s ramping up investment in content in a bid to catch up. The company recently agreed to acquire Bethesda Softworks, the developer behind popular game franchises like Fallout and The Elder Scrolls, for $7.5 billion.

Still, it has much catching up to do. Microsoft put the launch of its highly anticipated Halo Infinite game on hold after complaints about the game’s graphics quality. Halo Infinite was meant to arrive in tandem with with the Nov. 10 launch of Microsoft’s Xbox Series X and S machines, but is now expected to launch later this year.

Sony and Microsoft are both betting heavily on software and services driving revenues with their latest consoles. Sony said it now has 47.4 million users signed up to paid PlayStation Plus subscription service, up from 38.8 million a year ago. Microsoft said subscribers to its Netflix-style Xbox Game Pass service hit 18 million in January, up from 15 million in September.

Video games have largely benefited overall from the impact of the coronavirus pandemic, as people have spent more time indoors due to stay-at-home measures imposed around the world. Nintendo recently hiked its full-year forecast for sales of its Switch console.

Wed Feb 3 , 2021
TOKYO (Reuters) – Japan’s Sony Corp raised its full-year profit outlook by one-third, helped by pandemic-fuelled demand for games, movies and other content, but said it was struggling to build enough PlayStation 5 consoles amid a global shortage of semiconductors. FILE PHOTO: Women wearing protective masks walk past a poster […] 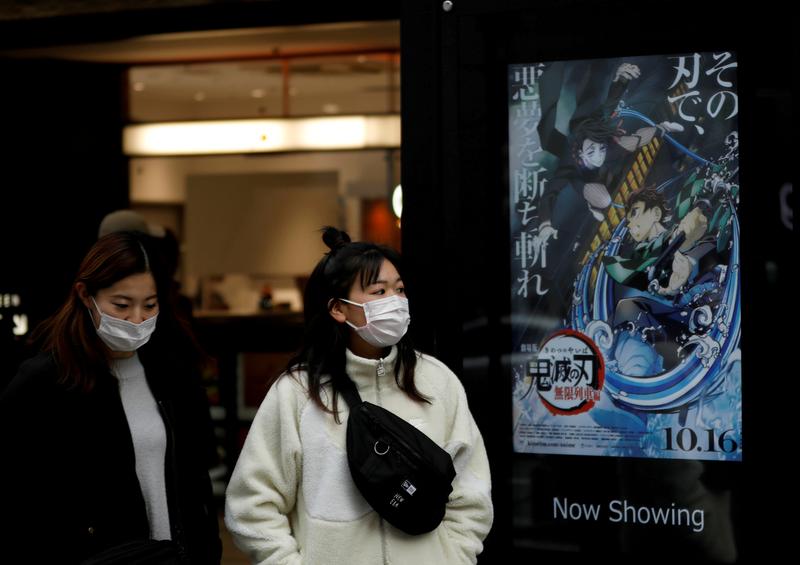