Millions of Californians on Thursday became eligible to get the Covid-19 vaccine as the state expanded eligibility to residents over the age of 50. But throughout the day, hundreds of people reported being unable to sign up for vaccine slots online. “There are NO appointments,” one Santa Clara resident tweeted. […]

Millions of Californians on Thursday became eligible to get the Covid-19 vaccine as the state expanded eligibility to residents over the age of 50. But throughout the day, hundreds of people reported being unable to sign up for vaccine slots online.

“There are NO appointments,” one Santa Clara resident tweeted. Other tweets read: “No appointments within 100 miles of San Francisco,” and “Is California’s new slogan ‘Perpetually behind’?”

Thursday’s problems didn’t come as a surprise. Despite its reputation as the world’s technology capital, California has struggled to develop a smooth process for Covid-19 vaccine sign-ups. At the top of Californians’ long list of complaints about vaccine distribution is My Turn, the website launched by the state as a hub for scheduling.

Since its launch in January, the system has struggled with glitches. The website often crashes, sometimes doesn’t show any appointments at all, lists appointments that do not actually exist, or at times allows users to sign up for a first vaccine dose but not for the second.

In addition to those technological hurdles, experts say My Turn’s more systemic failures represent an amalgam of California’s vaccination challenges. The site has been slow to catch up with the state’s ever-changing eligibility guidelines; it’s one of many systems in a fragmented distribution network; and it isn’t effective at prioritizing those most in need, despite state assurances that equity would drive the vaccination campaign.

“This is about decisions being made in [the state capital] Sacramento by people who have no direct relationship with our community and tried to impose a computer system that does not work on the whole state,” said Rebecca Kaplan, Oakland council member at large, who sits on the taskforce coordinating mass vaccination in the city.

Governor Gavin Newsom himself marked the expansion of the state’s vaccine eligibility criteria on Thursday, receiving a Johnson & Johnson shot at a vaccine site in a Los Angeles mall-turned-vaccination site, as members of the media watched.

But just like other times during the vaccination campaign when California expanded qualifications, sign-ups for the jabs did not go smoothly for everyone.

In fact, Thursday’s sign-up problems marked a continued indictment of the system meant to save California’s floundering vaccine rollout. My Turn first emerged as a pilot at the end of January to help users determine their eligibility for a vaccine, be alerted when they qualify, and sign up for one once they do. The launch came at fraught time for Newsom.

California at the time ranked worst in the country in terms of how many vaccines had been administered. Residents were fuming over school closures and ever-changing lockdown regulations. Newsom had drawn ire for a maskless appearance at a fine dining establishment while the rest of the state was under order to avoid indoor dining. A recall effort was looming.

The website’s development took just 10 days and was helmed by the California departments of public health and technology and built by the local tech giant Salesforce. The system debuted in select cities and was held up as an option for counties that had struggled to set up their own websites.

But after the private insurance provider Blue Shield signed an opaque $15m contract to take over California’s snail-paced vaccine roll out, Newsom announced My Turn use would become mandatory at the end of March. Counties and healthcare providers involved in distribution were up in arms and refused to switch over.

Providers complained that turning to the new system while some patients were between first and second doses needlessly complicated the vast undertaking.

Experts warned the criteria for eligibility on the My Turn site sometimes diverged from specific county rules and were not always updated after the state made changes in its eligibility criteria.

“Part of accessibility is making sure that My Turn is up to date with who is eligible to get a vaccine and where they can get one,” said Bernadette Boden-Albala, the dean of UC Irvine’s public health program. “There is a huge disconnect there that I think is very, very problematic.”

The technology failures are more than just an inconvenience, public health experts say; they also prevent some of the most vulnerable populations from getting vaccines.

“The most significant problem we are having in California with the vaccine rollout is that glitches with My Turn are exacerbating existing equity issues,” said Shira Shafir, assistant professor of epidemiology and community health sciences at the UCLA Fielding School of Public Health.

With My Turn, counties and medical providers all operating sign-up systems in tandem, technologically savvy residents and those with the time and computer access needed to refresh sign-up pages repeatedly have been more easily able to access appointments, said Shafir.

“While we want everybody to get an appointment and get vaccinated as soon as it’s their turn, what we’re seeing is a massive divide between those who have the ability to navigate through the platform to find their appointment and those who do not,” Shafir said.

In addition, several counties and providers argued the system was ill equipped to target vaccines to the most vulnerable communities, despite that being a stated goal of the government.

Kaplan in Oakland said the My Turn system did not, for example, allow vaccine availability targeting by zip code, which would allow neighborhoods hardest hit by the pandemic to be prioritized.

She argued that those systemic failures were far more consequential than sporadic, yet widely reported, incidents of privileged Californians skipping the line by using sign-up codes meant for low-income residents. “Those are a small fraction of the problem compared to the fact that the core system has been programmed to allow exactly that kind of inequity to happen,” she said.

Newsom vowed to change the system several weeks ago but it remained impossible within the system to set aside vaccines for certain communities, she said. “We are in the technology capital of the world and you are telling me we can’t fix these issues with My Turn?”

Newsom’s office and Blue Shield referred the Guardian to the California public health department for questions related to My Turn. .

Darrel Ng, a spokesman for the department, said My Turn was continually working to improve vaccine outcomes for Californians, and that many of the problems with booking appointments had more to do with vaccine supply than the website itself.

My Turn, Ng said, was an effort to get all the counties in the state on the same page after some struggled to get residents to sign up using a mix of low-tech and glitchy options. “We will admit that it does require some investment from providers to switch to a new system, but we think serving the people of California during a pandemic is worth that investment,” he said.

Ng said the state on 4 March made a renewed effort to address vaccine equity and My Turn since then released an increased percentage of vaccines to residents of the hardest-hit areas of the state. Meanwhile, the state has continued to provided sign-up codes to specific health care providers in those areas to distribute to their patients, he said.

“We are working to reduce as many barriers as possible to the hardest-hit communities getting vaccinated,” he said.

He also noted that California has now distributed 76.6% of its vaccine supply, which is about the national average. The state is now number 31 out of 50 in terms of distribution percentiles, according to Becker’s Hospital Review.

‘My Turn is just not where it needs to be’

All but one of the state’s 58 counties initially declined to contract with BlueShield. In recent weeks, with the eligibility expansion on the horizon, BlueShield and several counties have come to agreements that allow them to keep their own sign-up systems and incorporate their own local planning into the rollout – including keeping control of prioritization of certain communities and manners of distribution.

But still, only 38 of 61 local health jurisdictions, representing 82% of the population, have signed on so far, according to the public health department.

And even then, Boden-Albala said, much time has been lost.

“I understand there are a lot of challenges,” she said. “But My Turn is just not where it needs to be given how far we are into this vaccine campaign.

Sun Apr 4 , 2021
LOS ANGELES — The Los Angeles Lakers and LA Clippers are planning to welcome fans back to Staples Center for a game for the first time this season. The Lakers are finalizing plans to have fans in attendance when they play the Boston Celtics on April 15. The Clippers are […] 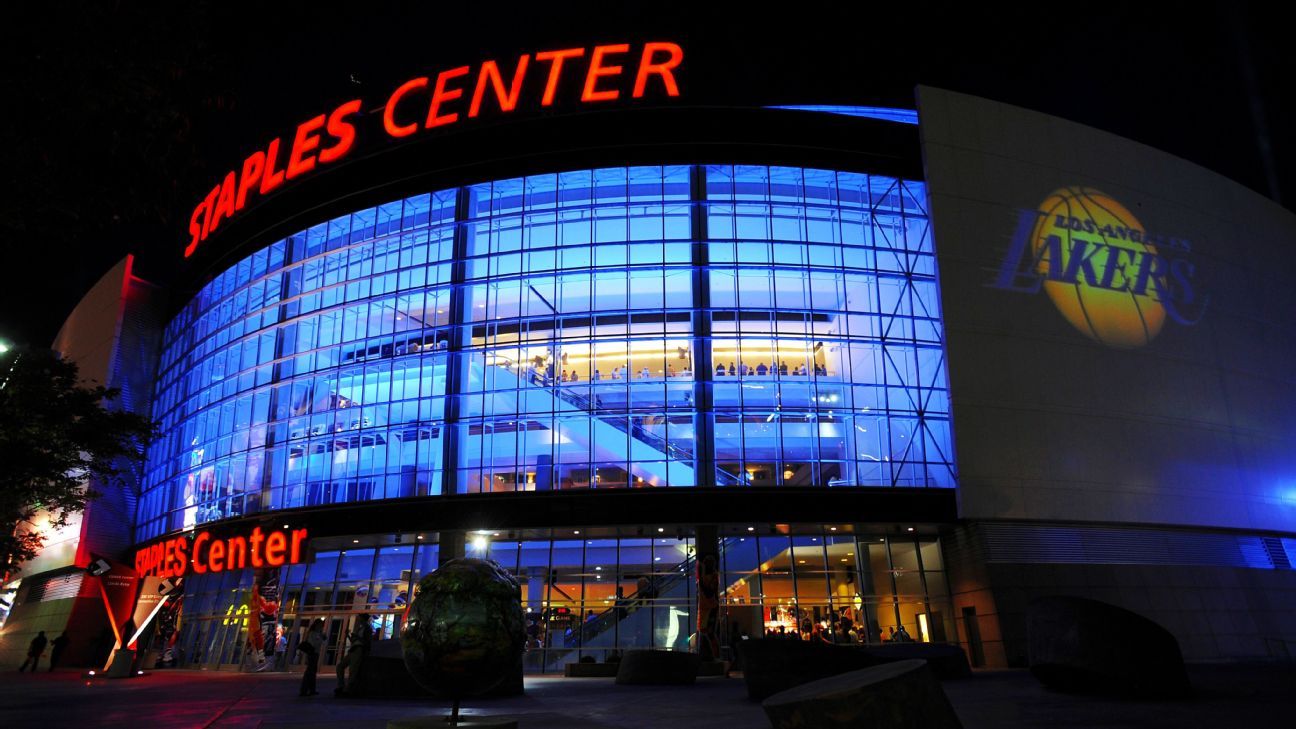