In its first-ever legal complaint, the Alphabet Workers Union alleged Thursday that a Google subcontractor banned workers from talking about pay and retaliated against an employee for publicly supporting the union on Facebook, signaling what type of issues the unconventional union will seek to address in the future.

According to the union, Modis Engineering, a subsidiary of staffing company Adecco, suspended Google contractor Shannon Waits after she complained to her managers about a rule prohibiting workers from discussing their salaries and their “refusal” to replace damaged water bottles for workers.

Waits works at a Google data center in Berkeley County, South Carolina, and her supervisor allegedly questioned her about a Facebook post where she expressed support for the union and discussed the water bottle issue.

The National Labor Relations Board complaint alleges that Wait was illegally suspended and that the prohibition on talking about wages violated labor law.

The Alphabet Workers Union is a bit unusual because it doesn’t have collective bargaining power and isn’t officially certified by the NLRB, but this type of “minority union” can still file complaints on behalf of contractors who are normally ineligible for union membership.

Neither Google nor Adecco immediately responded to a request for comment from Forbes.

“I want other TVCs (temporary vendors and contractors) to see this and know they have recourse if they see something illegal or unethical in their workplace. Alphabet’s segregated, two-tiered employment system will not stand in the way of worker solidarity,” said Parul Koul, executive chair of the Alphabet Workers Union, in a statement.

Though only a small sliver of Google’s workforce belongs to the union (800 employees out of more than 130,000), it’s existence represents one of the first successful Silicon Valley efforts to unionize its largely white collar workforce. Organizers say they want to protect workers against discrimination and harassment, especially after AI ethicist Timnit Gebru, a Black woman, was fired in December after an alleged conflict involving a paper she authored discussing bias in Google’s AI language models.

Sat Feb 6 , 2021
A West Palm Beach sister and brother, Shirah and Michael Benarde, both graduates of Oxbridge Academy, are scheduled to pitch their product “NightCap” on ABC’s Shark Tank when it airs at 8 p.m. Friday. NightCap, a drink-spiking prevention scrunchie, can be worn as a hair scrunchie or as a wristband. The cover […] 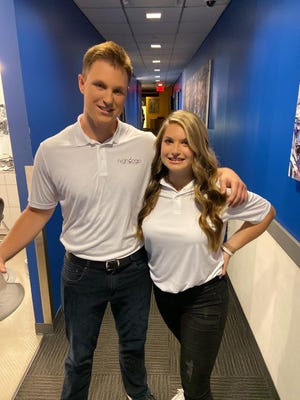